Like nursing politics was never one of my ambitions when I was younger. It was something that happened in the media and the local polling booths whenever there were elections on, and that was about it.  I guess it wasn’t till I commenced working for the State Rail Authority of NSW that I started taking more notice of politics as there were a number of industrial disputes happening during my time with State Rail. Some of the biggest industrial disputes in NSW took place with State Rail. One of the largest disputes happened in 1986-87 from memory when the rear guards brakevan was removed to enable two man crewing on freight trains. I was a freight guard myself at Broadmeadow Yards in Newcastle when this industrial dispute happened. During my nursing studies at university it was important to have an appreciation for politics as a lot of health policies depend on the politics of the day. As time progressed so did my interest in politics to which I started to see the differences in what different political parties strived for. Initially I was a Liberal supporter mainly from my family traditional background.

The 2007 federal election was the first time I changed my voting preference and voted for Labor to see Kevin Rudd elected as Prime Minister. The reason for that change was due to the WorkChoices campaign happening under the Howard Government in that era. I also saw a lot of unfair work practices happening when I was working in hotel/motel maintenance which made me look at politics more. During 2013 I decided to join the ACT Labor Party and have helped out at various campaigns around Canberra in the ACT. One such campaign was with the Kate Lundy team during the last federal election at the Fyshwick Markets as seen in the photo below. 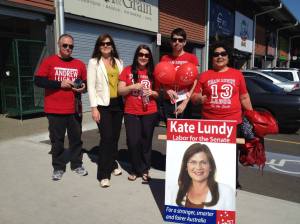 At this stage I am only helping out as a volunteer to help promote ACT Labor which has been educational and also meeting new people.