Media research indicates that from a recent Australian poll taken last week that there are 60 percent of Australians who believe the present Government’s border protection policies aren’t harsh enough. http://www.abc.net.au/7.30/content/2013/s3925614.htm

I would like to state upfront that I am not in that 60 percent bracket. This does not mean I have a lower opinion or expectation of protecting Australia’s borders, but I’m more concerned in the humane care factor that asylum boat people are living with. During 2010 I took a degree change from nursing to journalism and studied a number of units during that year. One of the units was “Introduction to media production” to which I came across a photograph and short film clip during the Vietnam War in 1972. http://www.youtube.com/watch?v=Ev2dEqrN4i0 .

It is very confronting so be warned before watching it.

The reason why I displayed this graphic image is to illustrate that not all asylum boat people are just out for a free ride to Australia. The majority of asylum boat people have had to flee from their countries and homes due to ongoing persecution or even wars. This can be seen in the following news article published by the United Nations news centre in November 2013 regarding the Syria conflict where up to 20,000 (thousand) refugees have been fleeing into Lebanon. http://www.un.org/apps/news/story.asp?NewsID=46528&Cr=syria&Cr1=refugee#.UtVNoJ6SxQQ

That is only one area in our world suffering from wars and persecution causing people to flee and relocate elsewhere. Quite often there is a personal cost to people fleeing from their countries and homes as some lose contact with their families which quite often can result in death. I remember attending one of my clinical nursing placements when I resumed nursing again in 2011 and learning with another male student nurse who came to Australia from Africa. His story was quite educational as he also spent time in a refugee camp and had lost members of his own family due to a civil war that was happening where he lived in Sudan.

I remember when I was studying Indigenous Health in 2011 that the course convenor Auntie Kerry would embrace new students from other countries making them feel welcomed which was a nice touch I felt. Auntie Kerry herself is an Australian Indigenous lady who had suffered from some of Australia’s indigenous policies. Auntie Kerry understood the feelings of the students who had endured hardships prior to coming to Australia and helped them feel at ease and welcomed. For some reason our Australian policies aimed at reducing the asylum boat people issues seem to apply a more negative approach then one that is more humane in my opinion.

Towards the end of September 2013 I read an article in the Jakarta Post written by an Australian journalist called Greg Sheridan. The article was called Insight: Tony Abbott and his forthcoming visit to Indonesia http://www.thejakartapost.com/news/2013/09/30/insight-tony-abbott-and-his-forthcoming-visit-indonesia.html .

I replied to this article, and below is an extract of what I wrote.

“Stop the Boats” was an ongoing election slogan campaign by the Tony Abbott Liberal Coalition Party leading up to the Australian Federal election on September 7th this year. To coincide with this three word slogan was that the previous Liberal Coalition Prime Minister John Howard’s policy of “Turn Back the Boats” to Indonesia, which is also what Tony Abbott is working on.

Some of the Australian media articles have reported that the Liberal Coalition view is that if the illegal boats have left Indonesia it’s their problem and not Australia’s which is why they intend to turn the boats back. Personally as an Australian I disagree with the “Turn Back the Boats” idea as it lacks diplomatic substance in my view. My reason for stating that is recently I watched documentary on ABCNEWS24 on how the Indonesia officials and media viewed this topic which was educational to me.

One of the speakers for Indonesia was a female politician representing President Susilo Bambang Yudhoyono fairly high up in his staff, but I can’t remember her name. She made the point that the problem with Indonesia is the geographical layout of all their islands and various provinces that are a haven for boat smugglers to do their trade from. The other factor she mentioned was that Indonesia was being used as a transition country of all these asylum seekers passing through their various provinces and islands which makes it difficult to police and control.

When you look at the geographical lay out of Indonesia one can’t help but to see their point of view as it is a mass of islands and provinces which can be seen on any world map. It’s a different situation to Australia as we have this large mass of country that we can easily manage in comparison to Indonesia in my opinion.

My gut feeling is that perhaps Australia is a little unfair in turning up the heat and blaming Indonesia every time an illegal boat enters Australian waters given their problem of trying to police so many areas at once. I think we need to cut them some slack and work with them rather than against them as they are our neighbour’s so to speak just north of Australia.

In terms of the Cattle livestock trade it is important to understand the previous Labor government only axed the live cattle export trade on the treatment of the slaughtering process. This came about due to some media footage showing cattle being slaughtered in a slow dying process and not a quick death process. That was the real crux of the problem as Labor had a heap of Australians complaining to them over the treatment of livestock being slaughtered and as a result being in government had to make changes to rectify that issue. Hence why they axed the live cattle export trade till this situation could be improved. I don’t think it was ever the intention of the Labor Government to ban export livestock forever to Indonesia but just as an interim measure till the slaughtering process could be improved.

That’s’ just my layman’s view on the topic. I hope Australia and Indonesia will progress to become great neighbouring country friends. 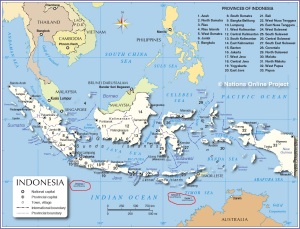 To conclude I think Australia can do better solving the asylum boat seeker issue with a bit more compassion as it seems to be based on a political platform perspective. Inflicting suffering and harsh living environments can’t be the long-term solution to this issue. I am sure empathy could be applied in this situation as I very much doubt we could live in their shoes (asylum seekers) on a daily basis.